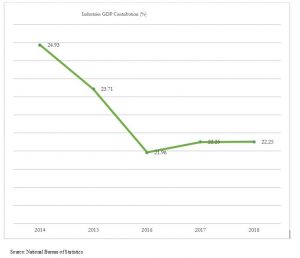 Nigeria is a natural location for a variety of industrial activities due to the availability of natural resources, affordable labour cost and large market. Its manufacturing sector is reemerging due largely to the improving performance of the consumer and household goods industries. It produces a large proportion of goods and services for the West African subcontinent.

The industry sector contributes an annual average of 23% of the GDP. The major activities include oil & gas (9%), manufacturing (7%), and construction (5%).

The sector is strategic to government’s objective of diversifying the economy in line with the Economic Recovery & Growth Plan.

Nigeria’s industrial aspiration is hinged on the implementation of the Nigeria Industrial Revolution Plan (NIRP) which philosophy is to build Nigeria’s competitive advantage, to broaden the scope of industry, and accelerate expansion of the manufacturing sub-sector. NIRP establishes cross cutting interventions that address competitiveness of the entire manufacturing sub-sector. The NIRP will ensure that Nigeria becomes:

Government is not unaware of the major challenges inhibiting the growth and development of the manufacturing industry; there is a huge commitment to ensuring that Nigeria generates a minimum of 10,000MW of power and ensure effective distribution of this power before the end 2023. Government is also committed to removing all non-fiscal barriers to investment and ensuring a competitive business environment that would promote free entry and exit of investors irrespective of nationality.

Government has deliberately designed investment incentives to support private sector participation in the sector. While some of these incentives are in form of tax holiday, exemptions, and reliefs, there are many more that leverage on specific government policies, performance of the companies as well as relevant international investment treaties. Some of these are:

For more information, please refer to the Compendium of Investment Incentives in Nigeria.

WHY YOU SHOULD INVEST IN NIGERIA