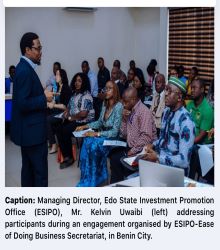 The Edo State Investment Promotion Office (ESIPO), has increased engagement with different Ministries, Departments and Agencies (MDAs) to improve the ease of doing business in the state.

He urged all relevant stakeholders to join hands in attracting and promoting investments in the state, adding that the goal is to make the state an investment destination.

He noted that the Governor Obaseki-led administration as part of its Making Edo Great Again (MEGA) agenda has adopted and promoted various administrative and enforcement mechanisms to implement and as well regulate policies and programmes that check the activities of key players in the business terrain.

He added that the team is to identify and fashion out possible ways to mitigate the negative circumstances that are working against business growth and sustainability and ensure a business-friendly environment for investors.

“The basic goal of the Team, he said, is to make Edo among the top five in Ease of Doing Business (EoDB) nationally. The Task Team was also saddled with the responsibility of assisting the state to prepare for the Presidential Enabling Business Environment Council (PEBEC) survey,” he noted.

According to him, “With millions of MSMEs in Edo State, the Government has put in place favourable legal, regulatory and institutional frameworks to escalate business growth and sustainability in the state. There has been a series of collaborations by the State Government with both internal and external bodies to facilitate the growth of MSMEs in the state.

“It is also worthy of note that Edo has also collaborated with a German firm, GIZ, to build the capacity of entrepreneurs in the state. Presently, the key players who are responsible for driving the economy of the state have the conviction that when the economy of a state improves, every other sector of that state will also experience some level of improvement.”