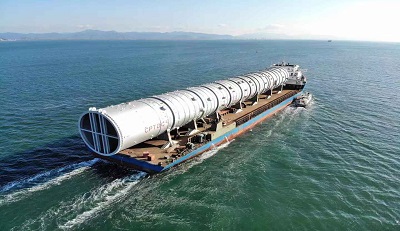 The Maritime Silk Load has been shipped to Nigeria and will be installed at the world’s biggest single-train refining facility – Nigeria’s Dangote Refinery.

The Dangote oil Refinery is owned by the Dangote Group and is under construction in Lekki, Nigeria. It is expected to have a capacity to process about 650,000 barrels per day of crude oil.

The refinery site covers an area of 2365ha on the Lekki Free Zone near the Lagoon. After completion, the refinery is expected to produce petrochemical products which will be supplied across the global. The industry will also provide refined oil to countries which import fuel under a fraudulent subsidy regime.

Nigeria’s oil reserves is the second largest in Africa with approximately 37 billion barrel. However a 200 million populated country face challenges to access fuel which is produced locally in the country.

The Dangote refinery is built with infrastructural facilities such as a pipeline system, access roads, storage facilities, maritime and jetty harbour, crude and product handling equipments. The refinery will also contain a fertilizer plant which as it converts the by-products for raw materials.

According to a Citac analyst, Jeremy Parker the atmospheric tower is the primary unit processing crude oil into fuels. The President of Dangote Industries Limited, Aliko Dangote built his fortune on cement. In 2018 he highlighted the plans to finish building the $12-$14bn refinery in 2019 and to start production in early 2020. After completed the factory will provide 650,000 barrels of crude daily.