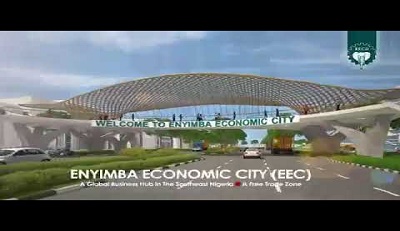 The International Finance Corporation, global financial management services giants, has signed an agreement with the Enyimba Economic City to market the project to the global market.

Chibuzo Chiemela Ekwekwuo, the company secretary and legal adviser of Enyimba Economic City, disclosed this at Government House, Umuahia while making a presentation on the project to a group of Igbo Economic Professionals known as Nzuko Umunna, led by Emeka Onwuka, former managing director of Diamond Bank Plc.

Ekwekwuo said that the agreement was the single biggest endorsement for the project and was a clear indication that the Enyimba Economic City Project has all it takes to rank amongst the top business deals on the African continent.

He noted that the International Finance Corporation was the Investment arm of the World Bank Group with over 60 years experience in unlocking private investment, creating markets and opportunities where they are needed most.

While describing the Enyimba Economic City as the single largest Development Project in Nigeria to be undertaken under the Public Private Partnership model, Ekwekwuo stated that it was 100percent private sector-driven with a clearly defined shareholding structure of 50 billion shares. 50percent of the shares had already been subscribed while the remaining 50percent would be publicly offered through an Initial Public Offer (IPO) within the first five years of the commencement of construction.

Ekwekwuo also said that the project would have first class infrastructure provided by leading global infrastructure development giants with all agreements signed to that effect.

“There will be uninterrupted power at the city to be generated independently off the National Grid through the construction of a dedicated Power Plant in addition to the Power Purchase Agreement already signed with Geometric Power with guaranteed financing of 135 million dollars already in place by Chinese textile giants, RUI Group. The City will have its own private sector-driven administrative agency to ensure first class service to its stakeholders,” he said

He noted that the strides so far achieved in the project could not have been possible without the commitment of Governor Okezie Ikpeazu who pulled all available strings to market the project to the Federal Government and successfully pushed for the granting of all necessary approvals from Special Economic Zone status, Free Trade Zone status, Inland Port status, among others from the Federal Government.