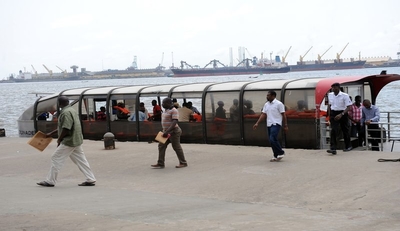 The ride-hailing service company is in talks with the Lagos state government and regulatory authorities to start Uber Boats services on its waterways, Uber’s Chief Business Officer Brooks Entwistle said Thursday in an interview.

“We know the traffic is a priority and we think we can help there,” Entwistle said. “We are having fruitful good discussions with the regulators right now, it is what we are doing this week, we are meeting with partners.” The executive did not give a time line on when the service will begin

Lagos, sub-Saharan Africa biggest city with an estimated population of 22 million, is known for its traffic congestion leaving commuters spending hours in their cars. Public transport services are scarce and unreliable. Its vast waterways provide good transport options but they are hardly used.

Uber, which faces competition from Estonian-ride hailing firm Bolt, said it would seek partnership with local players for the service. It currently has 1.3 million active riders and 36,000 drivers in Sub-Saharan Africa. The U.S-based company said its franchise in Africa is still at early stages.

“Our strategy is in every country we going into we want to find local partners to help us with our business,” Entwistle said. “Partnership is core to our business.”

San Francisco-based Uber launched a boat service in Egypt in 2017, with taxis zipping up the Nile River that dissects Cairo to bypass clogged streets. The company has expanded the service to cities including Mumbai and along the Croatian coast. It is also looking to partner with Lagos Bus company to provide ride services through its platform according to the CBO.

The transport company is in talks with regulators to start operations in Francophone Dakar and Abidjan, Entwistle said.