SEC, Ministry of Finance To Partner On Project Light House 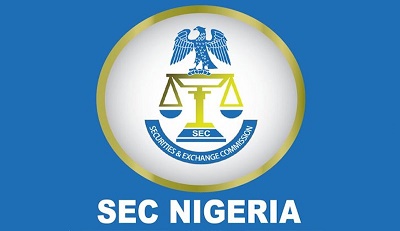 The Securities and Exchange Commission (SEC), has pledged to co-operate with the Ministry of Finance on the recently inuagurated Project Light House.

Acting Director-General of SEC, Ms Mary Uduk, said this in a statement by SEC’s Head of Media, Mrs Efe Ebelo, yesterday in Abuja. Uduk, while commending the Minister of Finance, Mrs Zainab Ahmed on the initiative, emphasised the need for relevant agencies to assist the Federal Government in revenue generation.

“It is clear that data and information will certainly aid the generation of more revenue.
“And in the long run, all agencies will be the better for it as there will be more resources for government to carry out development.

“Data gathering and sharing is the way to go especially in this digital age.
“When there is available data, information can be shared and that will increase the compliance level as well as improve revenue generation,” she said.

Uduk said low revenue generation was a source of worry such that when the target was not met, government would not be able to provide critical infrastructure that would encourage investment in the country. She therefore pledged the full co-operation of the SEC to ensure that relevant data were made available when needed by the committee. Also, the Minister of Finance Mrs Zainab Ahmed said one of the key economic policy objectives of the government as contained in the Economic Recovery and Growth Plan (ERGP) was improving it’s overall revenue, especially the non-oil revenue sources.

Ahmed said the government also aimed among other goals, to increase the tax base by drastically increasing the Company Income Tax and Value Added Tax compliance. This she said, would bring in additional tax payers into the tax net, and increase Tax to GDP ratio from its current six per cent to 15 per cent by the year 2020.

Ahmed said that in the last few months, major steps had been taken to address the nation’s chronic revenue challenges. She listed some of the measures taken to include , Strategic Revenue Growth Initiatives (SRGI), formulating policies and fiscal matters, preparing annual estimates of revenue and expenditure for the federal government among others.

“ We live in a technology and data-centric world but we lack the culture of using data and information to guide the formulation, implementation and impact assessment of our initiatives and policies.