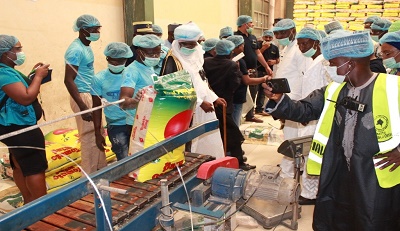 Production of local rice in the country has received a major boost as Popular Farms and Mills Limited, a subsidiary of the Stallion Group has inaugurated a multi-billion-naira rice mill expansion of 140,000 metric tonnes (MTs) per year.

Popular Farms also laid the foundation for a 44,000 MTs per year Sesame Processing Plant at its Challawa Unit in Kano.

The company has commercial interest in the rice value chain, with an installed capacity for 430,000 metric tons and plan to expand to 1.5 million tons of paddy rice processing per annum.

This is expected to impact positively on the Nigerian economy and the food sector.

Speaking on the planned expansion, Managing Director, Popular Farms, Mr. Amit Rai, stated that over 80,000 farmers across paddy and sesame supply chain are going to be positively affected, while saving the country the needed foreign exchange.

He noted that over 1500 direct and indirect jobs would be created.

The initiative, he added, would also boost Popular Farms’ initiative in empowering farmers in the rice and sesame value chain to become better business people with strong technical and business knowledge and skills.

Popular Farms & Mills, according to Rai, is currently in direct contact with over 40,000 farmers and approximately 1000 rice cooperative societies across the country, and with its flagship training programs for intensive farming at no additional cost to the farmers and but with maximum productivity.

This increases economic scaling in rice farming to over 36,000 out grower through its 16 Popular Aggregation Centres in Adamawa, Taraba, Benue, Niger, Gombe, Jigawa, Sokoto, Kebbi, Kano Zamfara and Kwara.

He acknowledged efforts of President, Muhammadu Buhari, the Minister of Agriculture, Chief Audu Ogbe and his team of experts at the Federal Ministry of Agriculture and Rural Development, the Central Bank of Nigeria (CBN) Governor, Godwin Emefiele, with regards to the agriculture sector.

He also commended the government at all levels for the positive initiative and robust policies which support the Agribusiness in Nigeria.

According to the Chief Executive Officer of Stallion Group, Anant Badjatya, the company was committed to the growth of the Nigerian economy, while contributing to government’s efforts on backward integration.

He said the goal of Stallion Group and Popular Farms was to spearhead and lead the rice revolution in Nigeria, stating that the company’s desire to do things right, spurred the ground-breaking ceremony of the project in Kano.

Badjatya also commended the inventiveness of the president Buhari-led administration and the policy direction of the agriculture sector been driven by Ogbe and Emefiele, saying that Popular Farms was already making a difference and bringing positive benefit to the Nigerian economy.

He urged the federal government not to relent in its quest to provide an enabling environment for the agriculture sector which in turn helps in reducing unemployment and generate revenue for the government.

In this regard, he lamented the unabated smuggling of rice via the countries porous borders and praised the efforts of the Rice Processors Association of Nigeria (RIPAN) for its fight against this scourge.

Badjatya said the group was steadfastly in support of all efforts aimed at stopping the smuggling menace.

He said the group gave 150 vehicles to the Nigerian Customs Services through RIMIDAN association at a discount of N250 million in a single transaction as its contribution towards the war against smuggling of rice.

Speaking further, the Group CEO noted that the menace of smuggling not only affects Nigeria’s potential in rice, but also extends to the smuggling of new and used cars which is currently happening with impunity, thereby putting at risk thousands of much needed jobs in Nigeria.

The Minister of Agriculture and Rural Development, Chief Audu Ogbe, represented by Mallam Munir Mohammed, praised Popular Farms and Mills Limited for its ingenuity and contributions not only to the agriculture sector in Nigeria, but also efforts and commitment to reducing unemployment and empower farmers.

He pledged the ministry’s commitment to continue to support Popular Farms, as according to him, “what we saw today is in line with federal government’s policy of self-sufficiency in Rice production.”

On the issue of smuggling the minister’s representative assured that “government at all levels are working on several options, including diplomacy, towards curbing the menace so as to ensure the issue does not escalate more than this,” and requested that the company continued on that contributory part as the government appreciates their effort a great deal.