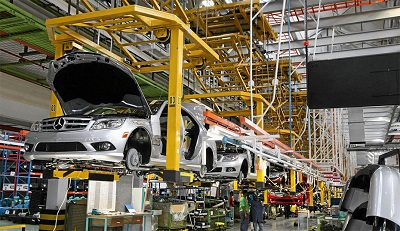 Jelani Aliyu, director-general of the National Automotive Design and Development Council,(NADDC) says arrangements are in top gear with South African automotive components and parts manufacturers to open shop in Nigeria and produce for the local and export markets.

The director-general disclosed this at a briefing in Abuja in Abuja on Wednesday, March 27.

Aliyu disclosed that the Council had already led a delegation to South Africa where they met and had discussions with the National Association of Automotive Component and Allied Manufacturers of South Africa (NAACAM), which supply the big global automotive companies, to support its proposed automotive supplier parks in Kaduna , Oshogbo and Nnewi, Leadership reports.

Going further, he said that the Nnewi Automotive Industrial Park when it comes on stream, would be a world – class hub of advanced technology which would supply world standard components.

Meanwhile, Legit.ng had reported that the Manufacturers Association of Nigeria (MAN) on Thursday, March 21, said the proposed VAT rate increment was unfriendly to the manufacturing sector.

The director-general of the association, Segun Ajayi-Kadir, made the remarks in Lagos, in spite of the rebuttal from the Federal Inland Revenue Service (FIRS) on the issue.

Ajayi-Kadir also said the proposed VAT increment did not take into cognisance the prevailing times and ongoing government efforts to re-invigorate the economy.