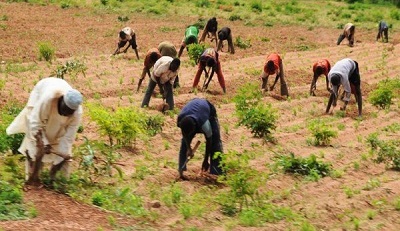 No fewer than 525 farmers in Imo State will benefit from agricultural inputs distribution under the Central Bank of Nigeria (CBN’s) Anchor Borrowers’ Programme for the 2019 wet season farming.

The benefitting farmers would be drawn from nine local government areas of the state.

A statement by Ms Anne Ihugba, head, Corporate Communications of the Nigeria Incentive-based Risk Sharing System for Agricultural Lending (NIRSAL), in Abuja yesterday, said the inputs would be administered through the NIRSAL.

She quoted Mrs Nkechi Osuji, the Head of NIRSAL’s Project Monitoring, Reporting and Remediation Office (PMRO), in Imo State, as saying that the programme would address problems of low-quality inputs, pests and diseases.

Osuji said it would also tackle the issue of poor agronomic practices and other challenges faced by smallholder farmers.

“NIRSAL’s focus is to address the various bottlenecks in the cassava value chain in the South-East.

This is the reason why NIRSAL is providing the farmers with improved cassava stems, fertilisers and, most importantly, crop protection chemicals to help them boost their production and achieve high yield at the end of the farming season.

Cassava farmers under the Aloha ticket, who have in the past suffered weed, disease and pest infestations on their farms, can now be rest assured that a solution to their challenges has come,’’ she said.

Ihugba also noted that farmers in other south-east states would also benefit from inputs distribution under the CBN agriculture programme.